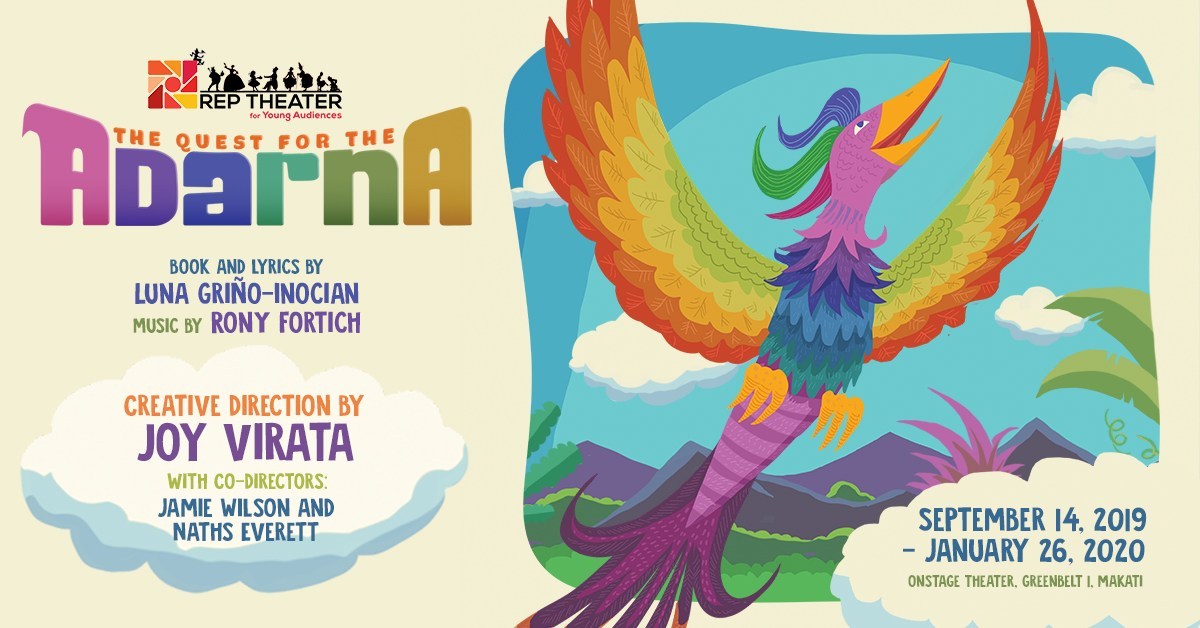 The story of the Ibong Adarna has captivated children across the Philippines for generations. Now, Repertory Philippines is bringing the colorful tale to life for families everywhere with a new English version called The Quest for the Adarna.

Produced through RTYA (REP’s Theater for Young Audiences), the vibrant original musical will be running from September 14 to January 26 at Onstage Theater, Greenbelt 1.

The play takes place in the peaceable and prosperous kingdom of Berbania, which is ruled by the beloved King Fernando and his equally loved wife, Queen Valeriana. They are blessed with three sons–all mighty warriors. The eldest and heir to the throne is the pompous Prince Pedro; the second son is the dashing Prince Diego; and, the youngest, the kind-hearted Prince Juan.

Their idyllic life is shattered when King Fernando is struck by a mysterious sickness and can only be healed by the song of the mythical bird, Adarna. Anyone wanting to capture the bird must travel to its home on Mount Tabor, a journey that is difficult and froth with danger. After his first two brothers fail on their quest, Prince Juan bravely takes on the task to save his father.

An enduring epic that remains one of our great cultural treasures, the Ibong Adarna story is reborn as an entertaining play with original music. Suitable for children of all ages, The Quest for the Adarna is an original RTYA Production under Creative Director Joy Virata, assisted by co-directors Jamie Wilson and Naths Everett, with music by Rony Fortich and book and lyrics by Luna Griño-Inocian.

The Quest for the Adarna is a must-see for its bright, colorful costumes, fun, child-friendly music, and its new English translation of a Filipino classic. The final play in REP’s illustrious 2019 season, Adarna teaches kids unforgettable lessons about family, courage, forgiveness, and love, all wrapped in an entertaining stage production.

With great ticket prices, families have every reason to bring their kids to see this magical musical. Orchestra center seats cost P800, orchestra side is priced at P600, while balcony seats go for P500.