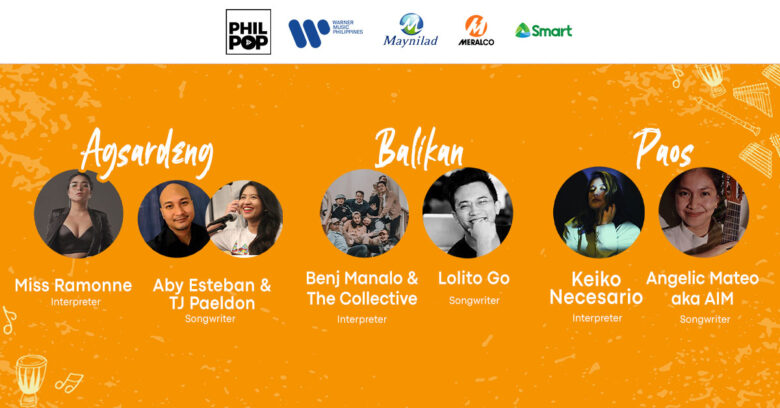 PhilPop takes the competition to an entirely impressive scale with the official release of songs from the North Luzon clusters.

Distributed by Warner Music Philippines, the homegrown songs are now available today, November 6, 2020 (Friday) on all digital and streaming platforms worldwide via PhilPop.

Paos: The beauty of unspoken emotions

Beautifully written with tenderness and warmth, “Paos” documents the repressed feelings of being tried and lost, but still wanting to be found. According to its composer Angelic Mateo, the song speaks about the aching truth in our everyday lives and the reality behind the unspoken emotions that reflect one’s bottom points.

“This song is a way to remind people that everyone fights a unique battle.” Mateo explains  in a statement. “Moreover, it hopes to emphasize how people must not forget to genuinely understand what the other one is going through because reaching the bottom thorns and wanting to pause does not make a precious soul weak.”

The subtly produced track is interpreted by acclaimed singer-songwriter Keiko Necessario, who gave her own incredible spin on the serene pop ballad. Despite her own vocal inflection and stylistic take, Necessario remains faithful to the underlying message of the song, careful not enough to blur its intentions while owning the material with genuine understanding on what it’s all about.

Balikan: a dissolution of romance

“Balikan” is a post-breakup anthem that laments on the irreversibility of the past and mocks the prospects of reunion. According to composer Lolito Go, the song was inspired by his friend Jake Vargas’ split with actress Bea Binene.

“I was challenged to write a song about it and that’s the time I wrote the first draft of Balikan,” the singer-songwriter shares. “The song revolved around a couple of lines I originally wrote 7 years ago for a popular ‘Hugot’ page on Facebook back when I was one of its content writers.”

The early iteration of “Balikan” leans on the acoustic ballad side, and was set to be performed by Jake Vargas. But after being selected as one of the fellows for PhilPop bootcamp, Go had a change of heart, and the song underwent changes in terms of how it was arranged and produced. The final version is reimagined by Benj Manalo and the Collective, whose Motown-inspired, funky feel deserves props.

Agsardeng: breaking the cycle of abuse

“Agsardeng” is an empowering song that tackles the breakage from the cycle of abusive relationships. According to Abby Esteban, one of the composers of the emotionally penned track, it follows the story of a person who is stuck in recurring domestic abuse, and finally decides to emancipate from its trappings to start anew. ”We wanted to write a socially relevant yet easily digestible pop song that could hopefully serve as a voice and inspiration to those who have survived and are still experiencing gender-based and domestic violence,” tells Esteban. “This is their story we are amplifying.”

Esteban and her co-composer TJ Paeldon used Ilocano and Filipino lyrics in its attempt to convey both the regional and global appeal of their entry, while catering to contemporary listening standards. Paeldon adds, “We are also aiming on promoting the Ilocano dialect mixed with our National language which is Filipino, for us it’s all about bridging the gap between Filipino and our Ilocano dialect so everyone can appreciate this song and also appreciate the beauty of the Ilocano language which makes a very large portion of the North Luzon cluster.”

As for the overall sound, Esteban and Paeldon are very particular with melding Ilocano native instruments with vintage-sounding synthesizers to recreate their version of a modern lullaby. Interpreter Miss Ramone adds her sultry and soulful take on the intricately nuanced jam, while making sure to keep up with the ambition of its sound design.

“Paos,” “Balikan,” and “Agsardeng” are are now available on streaming and digital platforms worldwide via PhilPop and Warner Music Philippines.