In February 2018, The Sandbox Collective returned from an indefinite hiatus and renewed its commitment to provide groundbreaking, cutting-edge theatrical work. Taking on what seemed to be a herculean task and a leap of faith for a company that had just decided to reopen its doors, The Sandbox Collective, in its first collaboration with sister company 9 Works Theatrical, restaged one of Philippine theater’s finest and most prized possessions— Ricky Lee and Vincent A. deJesus’ HIMALA: ISANG MUSIKAL. 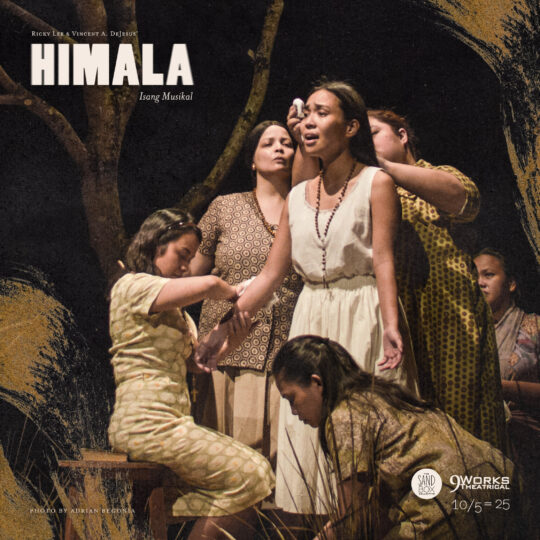 The show proved to be the miracle of all miracles—bridging the invisible divide between theater communities of various pursuits and backgrounds, and solidifying Himala as a timeless masterpiece to be revisited and retold generation after generation. After a critically acclaimed and sold-out run in 2018, Himala: Isang Musikal earned multiple nods and garnered a total of eight Philstage Gawad Buhay Awards, including Outstanding Production of Existing Material for a Musical. Due to Himala’s widely successful run and insistent public demand, the award-winning musical returns to the stage this September.

Based on the cinematic masterpiece by Ricky Lee and Ishmael Bernal, Himala or “miracle” follows the story of a young woman named Elsa who becomes a savior in the eyes of a bucolic town longing to put an end to its suffering. With music and lyrics by Vincent A. deJesus and book and lyrics by Ricky Lee, Himala broke barriers as one of the most celebrated film-to-stage adaptations in Philippine theater history. In what National Artist for Music Ryan Cayabyab called “a triumph of theater and music” 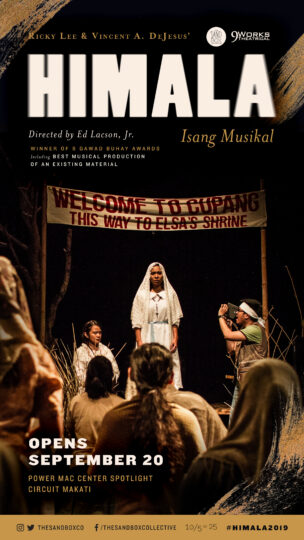 Himala: Isang Musikal returns to the stage this year to cap off a milestone season for both The Sandbox Collective and 9 Works Theatrical, as they celebrate five and ten years in the industry, respectively. With fresh, new faces and refined orchestrations that are poised to make the soundscape even more hauntingly beautiful, Himala makes its much-awaited comeback with more grit and fervor. 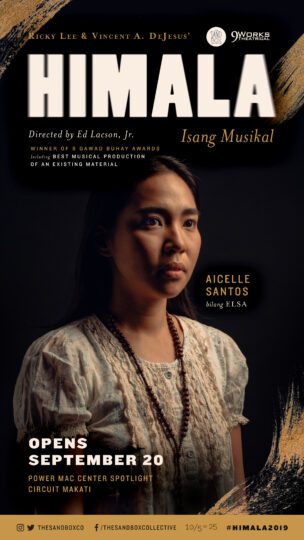 Fresh from her West End debut as “Gigi” in Miss Saigon, multimedia star Aicelle Santos makes her highly anticipated comeback in the role of Elsa, for which she recently won a Philstage Gawad Buhay Award for Outstanding Female Lead Performance in a Musical. The multi-awarded singer and host hold the title of being the “First Undefeated Pop Superstar” having achieved eight straight wins in the nationwide search, Pinoy Pop Superstar. Some of her recent theater credits include Rak of Aegis, Katy! the Musical, and Maynila sa mga Kuko ng Liwanag, for which she received an Aliw Award and a Philstage Gawad Buhay Award for Female Featured Performance in a Musical.

Celine Fabie, soprano and longtime member of the Ryan Cayabyab Singers, is thrilled to be filling in for the role of Elsa at certain performances. A graduate of Ateneo de Manila University, Fabie is a prolific performer and writer. She was the recipient of the National Book Award and the Madrigal Gonzalez First Book Award. With over 11 years under her theatrical belt, she was most recently seen in Katy! the Musical, A Midsummer Night’s Dream, Once on This Island, and Jesus Christ Superstar.

Philstage Gawad Buhay nominees, Kakki Teodoro, and Neomi Gonzales both return to their roles of Nimia and Chayong, respectively. Teodoro and Gonzales both received nominations for their critically-acclaimed performances in last year’s run of Himala. Teodoro was most recently seen in The Sandbox Collective’s Every Brilliant Thing, which also earned her a Philstage Gawad Buhay semestral citation. Gonzales was most recently seen in 9 Works Theatrical’s Eto Na! Musikal nAPO!, winner of the 2019 PHILSTAGE Gawad Buhay Award for Outstanding Musical – Original. David Ezra reprises his role as the troubled filmmaker, Orly.

Aliw Awardee, Ezra was most recently seen in Mabining Mandirigma and Ang Huling El Bimbo. Meanwhile, Gawad Buhay and Aliw Award nominee, Floyd Tena also reprises his role as pari in this year’s staging of Himala. Tena was most recently seen in Binondo and Musikal nAPO! Marking her return to Barrio Cupang is legendary actress and singer, May Bayot-De Castro. She joins the 2019 production of Himala: Isang Musikal in the role of Nanay Saling. Bayot-De Castro is known for playing the iconic role of “Elsa” in the 2003 original stage adaptation, for which she won the Aliw Award for Best Actress in a Musical. A certified leading lady in Philippine theater, some of her notable performances include Once On This Island, Rama at Sita, Kung Paano Ako Naging Leading Lady, Kleptomaniacs, Ibalong, Sandosenang Sapatos, Carmen and Skin Deep, which earned her a Philstage Gawad Buhay Award for Best Actress in a Musical.

Alternating for the role of Nanay Saling is West End alumna and Philstage Gawad Buhay awardee, Sheila Francisco, who has the distinct achievement of being nominated for three
different productions and categories in a single year. Francisco is also known for having been the very first Filipina to perform at the prestigious National Theater in London, where she received critical acclaim for her performance as “Bloody Mary” in South Pacific’s London and UK Tour. Some of her recent credits include Portrait Of An Empress, Ang Huling El Bimbo, Cinderella, La Cage Aux Folles, The Boy In The Bathroom and A Doll’s House Part 2, for which she recently won a Philstage Gawad Buhay Award.

Vic Robinson is thrilled to be celebrating his 10th year in the industry by joining the cast of Himala: Isang Musikal. He is set to alternate with Sandino Martin in the role of Pilo. An actor, commercial model and voice talent, Robinson’s professional career took off when he played the title role in Si Juan Tamad. Some of his notable theater credits include: Sa Wakas. Ang Diyablo at ang Limang Milyong Boto, Batang Rizal, Lola Basyang, FnL, Ako Si Josephine, Tagutaguan and Singapura.

Joining the company are Jon Abella who recently won a Philstage Gawad Buhay Award for his performance as Donnie in Eto Na! Musikal nAPO!; Pamela Imperial who is notable for her heartrending performance as Katharine Lyons in Dani Girl; veteran actor Red Nuestro who was most recently seen in Ang Huling El Bimbo and All Out of Love; Sean Inocencio who recently played the young Emilio Aguinaldo in Miong.

Nearly four decades after the film and two decades after its theatrical debut, the story of Himala will continue to shed light on the complexity of humanity, exploring the thematic tension between truth and delusion, and religion and blind faith. Through the lens of Barrio Cupang and its reluctant heroine, we discover the power of belief and the danger of mob mentality. Time and again, Himala may well serve as a reminder that for history not to repeat itself, “miracles” must be revisited and stories ought to be retold.

Award-winning director, Ed Lacson, Jr., returns to the director’s chair in this year’s re-run of Himala: Isang Musikal. He also doubles as the show’s set designer. Multi-awarded composer and lyricist, Vincent A. deJesus, is at the helm once again as a composer, lyricist, and musical director. Completing the artistic team is Ricky Lee as writer and lyricist, Barbie Tan-Tiongco as a lighting designer, Carlo Pagunaling as costume designer, Jed Balsamo as music consultant, JM Cabling as an assistant to the director and Ejay Yatco as assistant musical director.

Ricky Lee and Vincent A. deJesus’ HIMALA: ISANG MUSIKAL is co-presented by The Sandbox Collective and 9 Works Theatrical, in commemoration of their 10/5 anniversaries.

Disclaimer: The material above is distributed by The Sandbox Collective / 9 Works Theatrical for promotional purposes only.